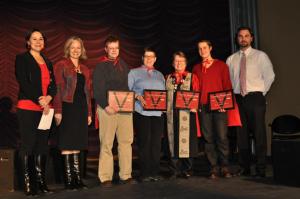 Thursday, February 2: Four plaques were awarded at opening night 2012 for The Vagina Monologues at the Kenworthy Performing Arts Center in Moscow, sponsored by the UI Women's Center.

V-Day—a global movement and nonprofit organization that works to stop violence against women and girls—kicked of this week with events organized by the University of Idaho Women’s Center, and events at Washington State University in Pullman. There are still two more opportunities to see the UI Women’s Center’s benefit production of The Vagina Monologues at the Kenworthy Performing Arts Center tonight and tomorrow (doors open at 6:30pm and the play begins at 7:00pm, tickets are $15 at the door).

Yesterday WSU Pullman held its 10th anniversary celebration of V-Day with a lunchtime ceremony in the Holland and Terrell Library atrium. The ceremony honored women whose character and strength make them role models in the community, and included Carmento Floyd, wife of WSU President Elson S. Floyd; Melynda Huskey, assistant vice president/dean of students; Felicia Gaskins, associate vice provost of equity and diversity; and Heidi Stanton, director of the Gender Identity/Expression and Sexual Orientation Resource Center. Pullman performances of The Vagina Monologues will be held February 9-11 at 7:00pm in the Jones Theater in Daggy Hall (tickets $12 at the door).

Two recent articles from the Moscow-Pullman Daily News provide insight into the productions, which were first presented in Moscow in 2002:

• In an article titled “I Was Not Alone in My Experiences,” Megan Kehrein reflects on her experiences seeing The Vagina Monologues for the first time, and on her experience performing in the play this year, in both the Moscow-Pullman Daily News and on the University of Idaho Women’s Center Blog.

• Another article from the Daily News covers some of the history of Vagina Monologues performances in Moscow, and provides details about this year’s production: https://nwchr.files.wordpress.com/2012/02/01-26-12_vagina_mon_dailynews.pdf

The Northwest Coalition for Human Rights (NWCHR) exists to facilitate connections and communication among organizations and individuals who are engaged in human rights and social justice work in the Northwest region of the United States, with special focus on the Inland Northwest. The coalition, inspired by Bill Wassmuth's former Northwest Coalition Against Malicious Harassment, will give strength to those working at the local level by allowing them to share resources, information, and ideas, as well as making them part of a larger support system. The University of Idaho Office of Human Rights, Access, and Inclusion (HRAI) in Moscow serves as the administrative home for the NWCHR, and the Coalition strives to build strong membership from throughout Idaho and eastern Washington, as well as from other parts of the Northwest region. All are welcome to join NWCHR and give their input.
View all posts by nwchr →
This entry was posted in Upcoming Event and tagged Human Rights Event, UI Women's Center, violence prevention. Bookmark the permalink.